First off, I’d like to issue an apology to all my Goldficianados for my absence – I’ve been a bad blogger and an awful human being to all of you.  I hope you haven’t left me for another Goldfish cracker-themed blog.  I blame my new TV,  Vince Gilligan for creating Breaking Bad, and the NY Knicks (because they should be blamed for all that’s wrong with the world) for my lack of posts.  That being said, I’m returning with a doozy:  I got my hands on some custom, tricked-out bags of Goldfish, bitchezzzzzzzzzzz!

My best bud Jeremy has had his birthday party on Fire Island the last couple years, so I got the idea of getting him some personalized Goldfish swag and busting it out during the evening’s festivities.  I went over to goldfishmyway.com (yes, that’s actually a thing) and the website allows you to order personalized cartons of ‘fish and you can write whatever the eff you want on it and upload pictures on two sides and PICK THE COLOR(S) OF GOLDFISH YOU WANT.  You can also get little containers or the standard sack size.  I did the damn thing and clicked submit like a boss.  Check out what arrived!

SHOCKED the delivery guy didn’t just steal this box as soon as he saw it.  Look at it!

So the containers were glossy cardboard and I had to assemble them, but it was easy.  The Goldfish came in individual baggies which surprised me but makes total sense.  Here’s the finished product:

Side 2, with my personalized instructions

I got a dozen of these puppies and hid them in my closet until the big bday party… which didn’t happen.  Fire Island never materialized, so I brought them to kickball and handed them out to the team instead. 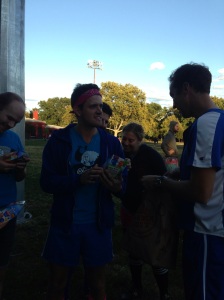 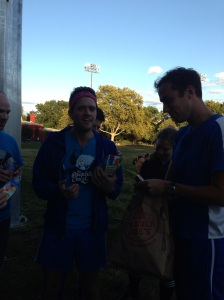 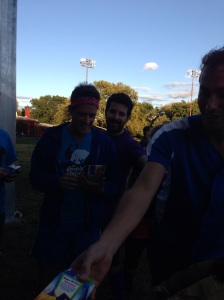 Success!  I’m pretty sure we kicked 3249857 home runs that day because of the power the ‘fish bestowed upon us.  All in all, it cost about $70, which is a small price to pay for 3249857 home runs and happy birthday boy.  You don’t have to spend that much though.. after all, it’s called Goldfish My Way.  Do you, son. 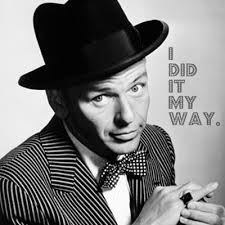