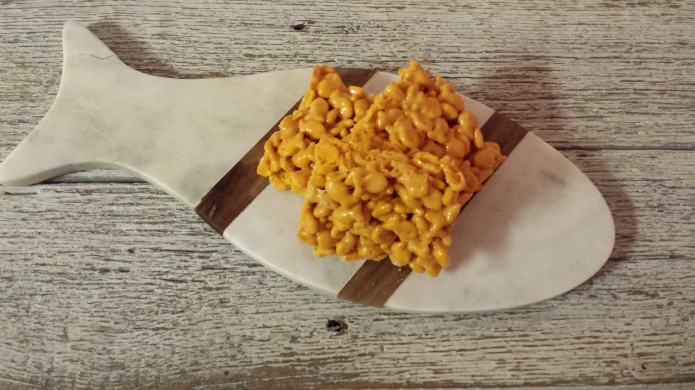 I got this idea in the middle of writing my previous post, while pontificating on the forgotten and neglected meal of dessertfast- stuff you can eat for dessert, breakfast, or at any time in between those two meals.  This here recipe makes for a great dessertfast.  When I first told people I was going to make  “Crisp Rice” treats with Goldfish, the main concern was the savory and sweet collision that was sure to be explosive, violent, and maybe slightly disgusting.  But these treats exceeded my wildest dreams, and not only are they not slightly disgusting, they’re quite delicious!  This is also an absurdly easy recipe, even for me who is a total spazoid in the kitchen.  So lets get down to the nitty fishie, shall we?

That’s it!  Only 3 ingredients.  Well, there is a secret ingredient, but I don’t even know if you should use it.  To be continued.. I’ll let the suspense boil over on this..

M’kay.  Prep a 13″x9″ casserole pan by buttering the bujeezus out of it.  Get down and dirty with it.

I probably could’ve skipped this horrendous photo.  I promise those are burn marks on the pan, not filth marks!

Once that’s done, take the 1/4 cup of butter and dump it into a big ol’ pot on the stove top.  Turn the heat really really low, because the internet says if the butter burns and browns, it won’t be as sticky or gooey when mixed with the marshmallows.  And nobody wants that, now do we?  So melt that butta up, and when it’s all liquidy, toss in the marshmallows.  You’re gonna stir all that stuff constantly until the marshmallows melt and it’s all even and creamy. 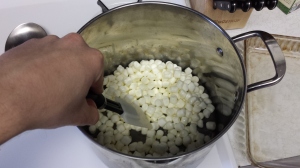 This is where the secret ingredient comes in.  I put in 2.5 tsp of milk in there because some charlatan on a recipe website said this would make it gooier.  Do 1.5 tsp instead.. more on this later.  OK, now take it off the heat and dump in the Baby Goldfish.  Keep stirring!  This is some real sticky icky icky!  Ooo-wee!

Make sure you coat all the fish evenly and don’t you DARE stop stirring!  Once you have a glutinous glob of Goldfish, take another spatula, butter both sides of it, and then scoop out the fish into the casserole pan and spread it around evenly.

Now this is where the recipe hits a minor snag.  There wasn’t enough to cover the whole pan, as you can see.  I mean, I could’ve spread them out more but they would’ve been so thin that it would have dumb.  But this is no biggie.  Now comes the horrific part of having to let it cool.  Good luck with this.  Staring at it with unblinking, lustful eyes may help it cool faster though, so I recommend that.  Needless to say, I jumped the gun and cut at them with a dull blade like a crackhead.  Check it:

Oops, you can tell I’m not wearing pants in this one..

These taste good!  I would even dare say great!  Well.. this is coming from a Goldfish extremist.  But I really believe that these will taste better than you think they will.  Its a different type of taste than the Rice Krispie version, yet the marshmallow makes it similar enough that it’s not completely foreign.  Goldfish and marshmallow are not things you would associate with one another, but they compliment each other well here.  This isn’t too sweet or too savory- the marshmallow covers up some of the saltiness of the Goldfish, and the Goldfish covers up the sweetness of the marshmallows.  It’s not too crunchy or crumbly either.  The reason I said to cut down on the milk is because they are a bit too gooey at first, but this is likely because I let them cool for a total of 4 seconds.  Just slow your roll and they will probably be fine.  This recipe makes about 9 treats or 1 treat the size of a car battery.  Enjoy!

Ho ho holy crap, look what Santa put under the tree for me!!

And my stocking was stuffed to the brim with Christmas Goldfish!

I must’ve been a good Goldfisherman this year!  Immediately after taking that pic, I hooked the stocking loop around my ear and went to town, feed-bag style.  I’m sure it’s how Jesus wanted us to celebrate his birthday.  So the big question – do the Christmas Cheddar fish taste any different from the regular cheddar fish?  Kinda!  I figured they wouldn’t, and I didn’t taste anything different about them at first, but day 2 of eating them I noticed an odd aftertaste.  Nothing bad, but not the typical zing of the standard cheddar flavor.  Maybe it’s the food coloring?  The fact that I was eating them out of a stocking that had been stored in the corner of my closet for a year?  Consider it a mystery for the ages, but nevertheless, they were a tad askew.  Keep in mind- this is coming from me, who eats Goldfish like it’s my job (hey, why isn’t this my job??  Somebody pay me for this, will ya?!), so most people will probably think they taste great.  And they do!  I just taste-tested the friggin hell out of them, and had them for breakfast, brunch, lunch, linner, dinner, dessert, and dessertfast for 3 days straight.  Speaking of dessertfast, Goldfish would be good as a Rice Krispie treat… omg.. OMG.  OH.MY.GOD.  Gotta go!