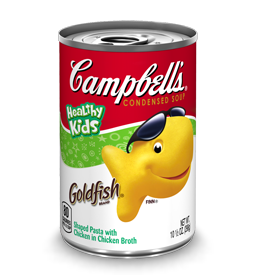 Has anyone ever seen or had this??  I just stumbled upon it on the intrawebz and in turn discovered that Campbell’s owns Pepperidge Farm… who knew!?   Are there Goldfish crackers in there or is the pasta shaped like Goldfish?   My preliminary research has come up inconclusive so far.  From the looks of the can above doesn’t seem like either is the case… it’s just chicken soup with pasta shaped like stars and circles which is incredibly lame.  I did find multiple versions of this soup though, see below: 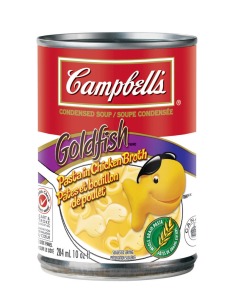 Now that one looks like the pasta is shaped like Goldfish, but there are no actual Goldfish Crackers in there.  HOWEVER: 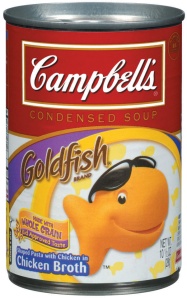 This one here looks like it has Goldfish in them because of the “whole grain” label on it.  WHAT IS GOING ON HERE SOMEBODY TELL ME!!

I gotta say though, as much as I love Goldfish, I can’t imagine a canned soup that already has the crackers inside it being anything but disgusting.  It’s just gonna be Goldfish mush, amiright??

If somebody has seen these soups or has had them, please reply in the comments section and lemme know the deal.  Whoever you are Campbell (if that is your real name), stop being such a mysterious temptress!!