Happy Halloween ghouls and goblins!  Actually, more like Happy Thanksgiving, turkeys!  Sorry that this is a month late, but I was waiting on additional photos that are evidently non-existant.  But check it out, I was a bag of Goldfish crackers for Halloween this year!  Here’s how I made the costume.

First, I got one of those 30 gallon leaf bags that people with lawns use for raking.  Actually, I got 5 because the internets doesn’t let you buy just one apparently.

I was hoping to find a white one so I wouldn’t have to paint it, but alas, True Value doesn’t cater to weirdos.  My first idea was to spray paint the whole thing white and then draw the package design on with markers, but this project started about 36 hours prior to Halloween, so I had no time for that nonsense.  Instead, I google image searched for a good picture of the front of a Goldfish bag, sent it to Kinkos, and asked them to print it as an 18×24 poster.  They did it in half a day!  Lookie here: 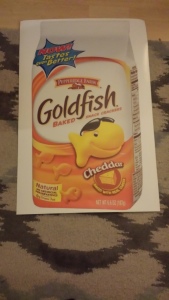 I cut the border off and proceeded to attach the poster to the bag using duct tape. 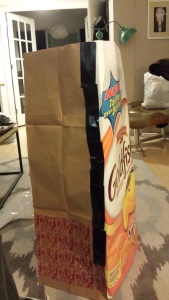 I also threw in some staples for good measure.  Now onto the painting.  I live in an apartment and don’t have a yard, so this was a tricky situation.  I figured that spray painting on the sidewalk in front of the school across the street would get me arrested in about 4 seconds, so I climbed out my kitchen window and tarped my fire escape and started spraying with wild abandon.  Despite being outside, I managed to stink up my apartment so bad that I had to leave, but it came out pretty sweet!

For the back, I decided to write out the nutrition facts and ingredients.  This was a grueling endeavor, as it took every ounce of control to keep my chicken scratch handwriting from coming out, and even still, I did a pretty lousy job. 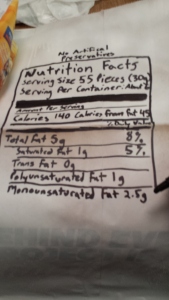 Did my 3 year-old niece write this?

I also snuck a special ingredient into the list:

Time to cut the holes for the arms and cut out the bottom.  After some adjustments to the neck hole to prevent strangulation, the costume was completed!  I threw on a white thermal and black jeans and was on my way. 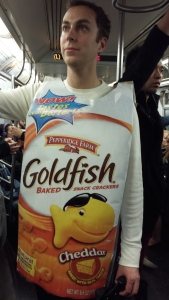 I forgot to take a pic of the back while I was wearing it, so this photo below was from the following morning and kinda looks like I wrestled a honey badger in this thing, but you get the gist. 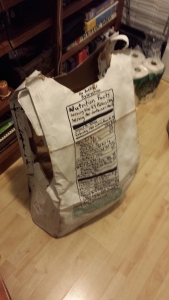 Oh, and I wore a fanny pack underneath and had a ziplock bag full of Goldfish crackers in it.  Folks were a bit grossed out at the sight of me seemingly pulling Goldfish out of my underwear and handing them out, but people still ate them.  Because Goldfish.