It was close, but after counting the MILLIONS of votes that flooded in, Goldfish Baby Cheddar edged out Goldfish Grahams Vanilla Cupcake by a 16% margin (7 votes to 5).  Now, on to the review:

First off, these guys are small.  Below is a baby Goldfish next to a full-sized: 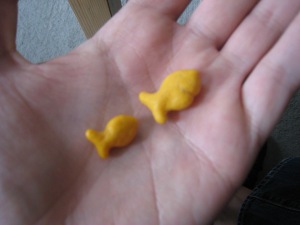 But wait!  These fish aren’t smiling!  I was a little disappointed by this because I like when my food is happy.  After reaching for another fish though, I realized I was wrong:

So half are smiling and half are not??  What is the meaning of this??!  Why did they do this I wonder… the faceless fish seem so anonymous and emotionally empty.  Perhaps they taste different?  Lets find out.

My first reaction after eating some were that the faceless fish were more puffy and hollow, and the smiling fish were thinner and more dense.  I wouldn’t say that the smiling fish are tough or too crunchy, but eating the faceless fish feel more like you’re eating the traditional-sized Goldfish.  The cheddar taste is present, and they managed to balance the saltiness and cheesiness to replicate the taste of the full-sized cheddar fish.  Eating the smiling and non-smiling together also produced a beautiful medley of crunchosity.  Also, since these fish are so small, you can really get a nice handful:

Theres gotta be like 20 fish in there.  Oh, and don’t think this means that you’ll be able to manage your portions and eat less because they’re smaller.  They are as delicious as the regular cheddar Goldfish, so any self control or willpower is out the window.  You are at the mercy of these fish, and you will finish eating them when there are no more fish to eat, so prepare accordingly.  However, if I had the choice between the baby cheddar and the full-sized cheddar, I would go full-sized.  They basically taste the same, but if you had the choice between eating Cookie Crisp-sized chocolate chip cookies and Entenmann’s-sized cookies, you’d go Entenmann’s, right?  Me too.  BTW, who knew Entenmann’s was spelled like that??  I first typed it out as “Entiman’s” which doesnt look right at all, but sounds more right than Entenmann’s.  Reminds me of when I was young growing up in Westchester and first realized that New Rochelle was not spelled “Nurrashell”.

Oh, and you thought the regular-sized Goldfish tend to end up on the floor and in the couch cushions?  These lil buggers end up everywhere.

Your dog will thank you though.